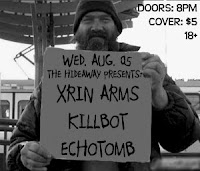 Hooking up with the Killbot for what should be a great night of breakcore madness. Xrin Arms, en route from the far West is bringing his own styled madness and from what I've read/listened/watched online he puts on one hell of a show. Looking forward to this.
Posted by Unknown at 9:47 AM

Recently, CD Baby.com began to update, revamp and enhance their website which inevitably means downtime, bad codes and frustration for all parties involved. So if you've been experiencing any of the above attempting to browse WWR titles, I apologize. I've been assured these issues will be resolved swiftly and I have no reason to doubt them.
Obviously, any orders can still be made to us directly and there's plenty of material to be digested at the respective WWR Artists Reverbnation.com pages.
Posted by Unknown at 8:02 PM

Click on the banners below to visit the respective Reverbnation pages for our WWR artists.

M.Peck (also known as Michael Peck and Redfadesbeforeblue) is a composer of electronic and dark ambient soundscapes.  He’s been recording music with digital synthesizer, software applications and Theremin since 2000.  Already known to the electronic scene as a maestro of ominous dark ambient, he brings us Dysmha.

“Deathbed Memory” is a texture of ambient sounds woven with Theremins, guitar effects, cymbals and some truly ghost-like vocals.  It has what can best be described as a monumentally glacial mood.  This is definitely music to conjure up a sinister atmosphere.  Howling effects ascend and descend into a wasteland of eerie sounds.

“Ghost With Conscious”, while similar in sounds has a definite industrial slant to it.   My only dispute is that maybe it’s a fraction too alike, as one song seemed to end without a new one beginning. That being said, it is a cohesive piece in relation to “Deathbed Memory” with a continuation of menacing sonic journey.

A level of above par production must be mentioned.  In a word, it’s flawless.  M.Peck’s technical ability is about as close to perfection as a performer can come to.  That perfection can lean on the side of coldness, but maybe that was the point of the compositions within themselves.  After all how many of our memories are of the warm and fuzzy nature (found on the deathbed or not)?  Could the specter without awareness of their thoughts and actions be those around us or our own selves?  Maybe M. Peck is asking us for that answer.