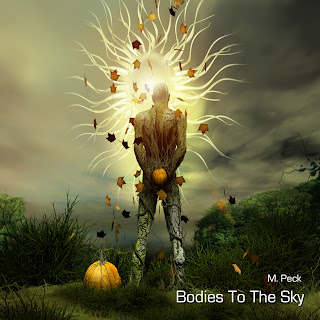 "Ethereal Live returns with its second release with ambient electronic stalwart M.Peck and a stunning live album called “Bodies To The Sky”. M.Peck, aka Michael Peck, is well known in the ambient and electronic communities as a solo artist, as one half of the duo Mahoney & Peck, his label Waiting World Records, and for a plethora of live performances around the U.S that include The Gatherings, City Skies, Star’s End, Electro-Music, and many more.
If you have ever seen Michael Peck play live, you know the powerful force of sound this musician can create in a space. Whether it is laptop, synthesizers, Theremin, or guitar, Michael Peck has an energy that cannot be ignored. Ethereal Live has had the pleasure of seeing this musician perform many times and each performance is always an impressive and unique set of twists and turns in sound that never repeat themselves. This live set is no exception.
Originally recorded live on Stillstream.com on January 30, 2010, “Bodies To The Sky” is a sweeping romp through several sub-genres of ethereal music. Listeners will find a grand mixture of light floating ambient drifts that sink into pools of darkness only to spill over into a multi-dimensional plateau of deep space sounds and then do it all over again. “Bodies To The Sky” stores it’s brilliance in its subtleties and fans of all genres of ambient music will find something quite worthy of their time.
Performed, Recorded, Mixed, and Mastered by M.Peck at Audio Propulsion Labs in June of 2011. The amazing artwork for this album is by Frank Pacini. Ethereal Live is very proud to release M.Peck “Bodies To The Sky” as a free Creative Commons download for all to enjoy."
Follow this link to download your free copy: http://ethereallive.wordpress.com/